We may earn commission from links on this page, but we only recommend products we believe in. Pricing and availability are subject to change.
Izabella Zaydenberg
June 29, 2022, 4:21 p.m.·4 min read

As much as my pup loves 4th of July for obvious reasons — namely, the potential that a stray piece of chicken or hamburger patty might accidentally fall off the grill and straight into her mouth — she also can’t stand the fireworks. She’s already a frightful pup; loud noises scare her, and a firework display is, without fail, a recipe for her running under my bed in panic, or worse, shaking under the nearest table she can find. She’s not alone: In fact, according to the American Kennel Club, more pets go missing on 4th of July than any other time of year.

While I’ve tried an endless amount of calming treats with varying degrees of efficacy, there’s one that my pup Chloe and I love, and it’s wicked inexpensive: Pet Naturals of Vermont Calming Dog Chews, $12. 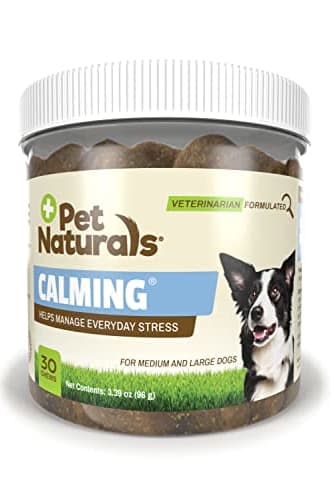 These chews are sedative-free and won’t tire your pup out; they last for four to six hours and start working up to 20 minutes after ingesting.

Now, they’re no replacement for basic pet parent common sense during fireworks: I still make sure to close all windows and draw the curtains, keep her safely inside and with her favorite plushies and blankets, and either watching a TV show or listening to tail-wagging songs. These treats act as an additional barrier between her and the loud, scary fireworks I know she’ll hear, and they seriously do help.

The chews use a Colostrum Calming Complex Biopepide Blend, L-Theanine and Vitamin B to soothe Chloe without making her sleepy or drowsy. They’re sedative-free and won’t tire her out; they last for four to six hours and start working up to 20 minutes after ingesting. They also reportedly taste delicious, as my furbaby runs straight to me when she sees me opening up the packet. They’re soft and easy to chew, so if your pet is older or has dental issues like Chloe, she’ll have an easier time with this than her kibble.

And they're not just for fireworks: I use mine whenever Chloe's being particularly antsy, like if there’s construction noise, or if she’s about to go to the vet. Other shoppers use them to help combat separation anxiety, jumpiness and even aggression.

Pups that get upset by loud noises particularly benefit from the treat. One shopper gives her little scaredy-dog some before thunderstorms:

Says the fan: "My 55 lb. boxer mix girl will run and hide in the bathroom with no windows or bury her entire body in my pillows when I'm near my bed, trembling violently the whole time, when she hears thunder...We started out trying just one of these, and it did help significantly, along with her Thundershirt, but it works even better if she takes two (sometimes with the Thundershirt, sometimes without). I like to think of it as anti-anxiety medication. When I hear the thunder, I offer these to her, and she knows they help because she chews and swallows them right down."

Another reviewer offered the calming chews before a long trip:

“It really works!" says the shopper. Normally the 30-minute drive to the beach she’s whining, ready to get out and play so we got these for her first four-hour total road trip and along with a seatbelt it was so stress-less. She ate it like it was a treat — no fuss! We only gave her one and it kicked in about 30 minutes later. Our VERY active 1-year-old German will now enjoy more road trips and adventures!"

For just $12, these inexpensive chews are a must-have, and if they save me the heartache of watching Chloe shake all night or worse, running around my neighborhood trying to find her, they're so worth it. 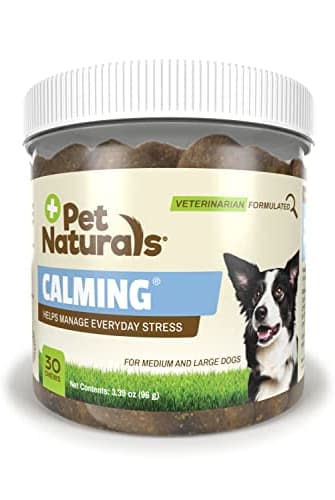 These chews are sedative-free and won’t tire your pup out; they last for four to six hours and start working up to 20 minutes after ingesting.

If you’re not yet an Amazon Prime member, sign up now for exclusive members-only access to Prime Day deals. Click here for a free 30-day trial.