This popular laptop is on sale for under $200

Yahoo Canada is committed to finding you the best products at the best prices. We may receive a share from purchases made via links on this page. Pricing and availability are subject to change.
Derek Arbogast
September 18, 2022, 12:21 p.m.·4 min read

If you're looking for a new, fun way to exercise thinking, "Hmm, pickleball looks fun. I should get myself a pickleball set!" Or maybe you've been lamenting, "I'm so sad just watching everybody else having a blast playing pickleball — I want to get in on that pickleball action!" Or maybe you're a mom who finds yourself dropping off the kids at pickleball practice all the time and have finally had the thought, "Why don't I stick around? I'll bet adults can enjoy this amazing game of pickleball, too!" 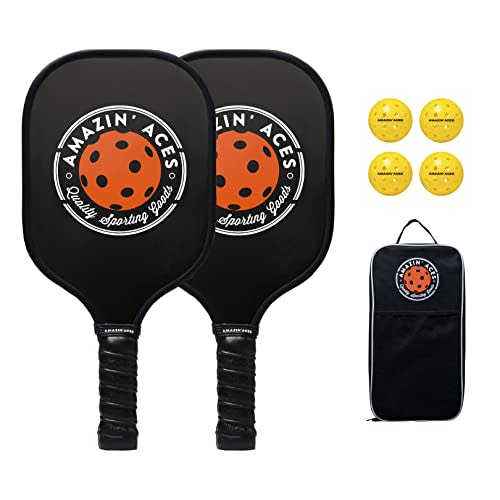 This pickleball set includes a pair of graphite pickleball paddles, four pickleballs and a sporty mesh bag in which to carry your pickleballs. Clip the on-page coupon for the full discount.

If you fall into any of those categories, boy, have we got good news for you! Right now, Amazon's got an, um, amazin' deal on Amazin' Aces Pickleball Classic Graphite 2-Paddle Set. While supplies last, and using an on-page coupon, you can score one for yourself for just $54 with the on-page coupon (was $80) and finally jump aboard the pickleball train.

The paddles are made to last, their polymer core overlaid with a graphite face. Their handles feature hand-stiched contour grips so that you'll be in full control as you smash that pickleball over the net. Weighing in at just 1.85 lbs., they're ideal for the beginner-to-intermediate pickleballer.

According to the folks at PlayPickleball.com, it's the fastest-growing sport in America. Invented in 1965, it's an ingenious combination of tennis, ping-pong and badminton. It's played on a court that looks like a tennis court, but smaller, and with a lower net.

Because of that diminutive court, and the use of a light, wiffle-type ball, pickleball doesn't demand all the exhausting — and knee-torturing — running around of tennis. Rather, most of the play happens close to the net, which makes for a game that strikes a perfect balance between hearty exercise and conviviality. And you don't actually need access to a formal court — once you've got yourself a set of paddles and balls, you can easily rig up a game in your backyard, driveway or friendly neighborhood schoolyard.

What's with the name, you ask? Apparently there's some debate. One telling has it that it's named after the dog of one of the founders, who would regularly take off with the ball during a lull in the action — hence, "Pickles' ball." The other claim comes from the world of oaring, a "pickle boat" being one manned by substitute or leftover players. So, the reasoning goes, pickleball alludes to the sport's mixing and matching of elements of a number of other sports. Like putting together a meal from...leftovers...which often involve pickles? Frankly, we like the first story better.

Anyway: the important thing is that you start playing pickleball and outfit yourself with this steal of a deal on a starter set. For just $60 you can have one speeding its way to your home. Oh, and Amazin' Aces offers a one-year warranty on this set. Any paddle problems, just hit them up and they'll replace or repair them, no questions asked.

That sounds unlikely to happen, though, based on what some five-star reviewers have been reporting. "We are new to pickleball, and we play on a cement court at the park," said one of them. "These paddles are taking a beating from being dropped, being scraped on the court/net, and from the occasional throw against the fence when I make a bad shot... but these are well made."

Said another: "Not knowing a lot about pickleball, these paddles exceed my expectations. They have held up very well to playing two to three times a week. They are superior to wooden paddles and have a perfect weight."

This pickleball set includes a pair of graphite pickleball paddles, four pickleballs and a sporty mesh bag in which to carry your pickleballs. Clip the on-page coupon for the full discount.

Amazon Prime members will, of course, get free shipping on their pickleball sets. But if you have Amazon Prime, you’ll get so much more — from access to new movies to two-day shipping on many items. Not yet a member? No problem. You can sign up for your free 30-day trial here.

So, wait are you waiting for? It's time to play pickleball! Get yourself a pickleball set and get on over to the pickleball court! We're not going to tell you again. Okay, one more time: PLAY PICKLEBALL!

Looking for more great Amazon home deals? Check these out: